Neymat has becoming a sensation in the blogging world, lifestyle BY M decided to bring its readers a get to know her segment.

Tell us about you?

I’m a twenty one year old from Durban. I’ve been blogging since April of last year at The Imperfect Muslimah and I’ve been writing since before I can remember. I only began to write Muslim fiction last year – I wrote something for the Irtiqa competition (It was so bad, it still makes me cringe). But I really enjoyed writing it. I wrote a handful of pages with other characters and stories but I didn’t actually write properly until Hidden Blessings. It was my first finished novella.

I also write for the Muslimah Bloggers community and I run social media for a few organizations. I’m still studying – I’m almost in the middle of my Bachelors in Foundation Phase Education.

Oh, how could I forget – I write for Tales of the Sisterhood too. And I’m about to launch my podcast In Shaa Allah.

About me personally… I’m shy. I know it doesn’t make sense since I like to do speaking engagements but somehow, I am shy. I love to cook and bake (and feed people). I also adore reading like most writers and I’m passionate about helping people.

Your first book was recently launched, what inspired the story behind the book?

To answer this question, I need to explain my writing process. The most common way for a story to begin for me is a single scene. I don’t find myself planning or strategizing much until I’ve been writing for a while and gotten to know the characters. Even then, it’s more focal points that play out in my head rather than a concise diagram or plan of what’s coming next.

Chains of Fear started right from the beginning which is fairly atypical for me.

“What do I want from life?” Ammarah asked herself. “If I die tomorrow, what will I regret having not done while I had the chance?”

Those are the first lines of Chains and they’re also what began the whole story. When I began, I didn’t know much about Muneer’s mother – or Ammarah’s. They evolved as I kept writing.

Does writing energize or exhaust you?

Both. Certain scenes get my  blood pumping while others sap my energy like leeches. The most difficult scenes to write are ones where your characters are going through difficulty. Chains of Fear doesn’t have many scenes that were difficult to write – without spoiling it, all I can say is that with my other novels I’ve had to delve deeper into how a person feels when they hit rock bottom and can’t even bear to think of how to pick themselves up again.

Not so with Chains. It’s a lighter story compared to my more recent ones.

What is your writing Kryptonite?

Pressure. I despise writing under pressure because it takes me that much longer to sink into the heads of my characters when I’m overthinking and stressed because I just need to get the chapter out.

Do you try more to be original or to deliver to readers what they want?

This is going to sound really mean but… I’ve never taken the considerations of readers into account very much and I won’t be doing so in the future either. When I was writing Hidden Blessings, I found that people wanted to know more about Taahir and Faaiza and I caved in and wrote more – I found that I didn’t know how to end things and so the ending to that novella is a lot more abrupt than it really needed to be.

What I will take into consideration is whether readers are confused or honestly don’t understand. Now, if you’re familiar with my work, you’ll know that there will be times when readers are *meant* to be confused until things finally work out. But I do monitor that confusion and will sometimes add in a  few throwaway lines to make things easier on them.

Other than that, everything I write is organic – it’s the only way I can write without dropping the project because it feels fake.

Do you want each book to stand on its own, or are you trying to build a body of work with connections between each book?

It depends. (Everything depends with me, it seems). Transmutation and The Art of Mutual Destruction are linked but Hidden Blessings is a standalone – so is Chains of Fear and Resisting Taqdeer. Because of the way I write – by feel and instinct – it’s hard to know completely whether I’ll end up getting attached to a minor character and continuing their story beyond the ending of the book they were first introduced in.

If you could tell your younger writing self anything, what would it be?

There was a period of time in my life where I’d completely lost the ability to write. It unsettled me deeply because writing was always something that had Alhamdulilah come easily to me. Even when I had writer’s block, I could still feel the words there behind the wall. When I lost that… it was terrifying.

If I could say anything, I’d want to reassure myself that that scary time was not going to last forever.

How many unpublished and half-finished books do you have?

In my head or on paper?

On paper, I have the print versions of Transmutation and The Art of Mutual Destruction to finish – I’ll be including extra scenes and other juicy mini-stories in both.

I have Digging Up Roots which is my next project just as soon as I’m done with Resisting Taqdeer and I have chapter one of a story called Faizal’s Patience which I don’t actually think I’ll end up finishing.

I also have several ideas that have been jotted down and left aside for another day when I have the time for them.

There are also anywhere between twelve and a million ideas in my head at any given time. My biggest problem as a writer is having too many ideas and not being able to choose between them for my next project.

How many hours a day do you write?

It really depends on the day and how much time I have to spare. My personal best is a bit over 7000 words in one day which works out to around 8.5 to 9 hours. I do try to write for at least an hour and a half every single day – it takes me that long to write up a chapter.

Please tell us more about your book

Chains of Fear is about a woman’s struggles to make her own choices. Ammarah’s paralyzed – she’s been paralyzed for a long, long time due to reasons that you’ll figure out as you read. Chains of Fear is about her journey, her slow realization that she does, in fact, have the key to those chains. She has the power to set herself free – all she needs to do is use it. 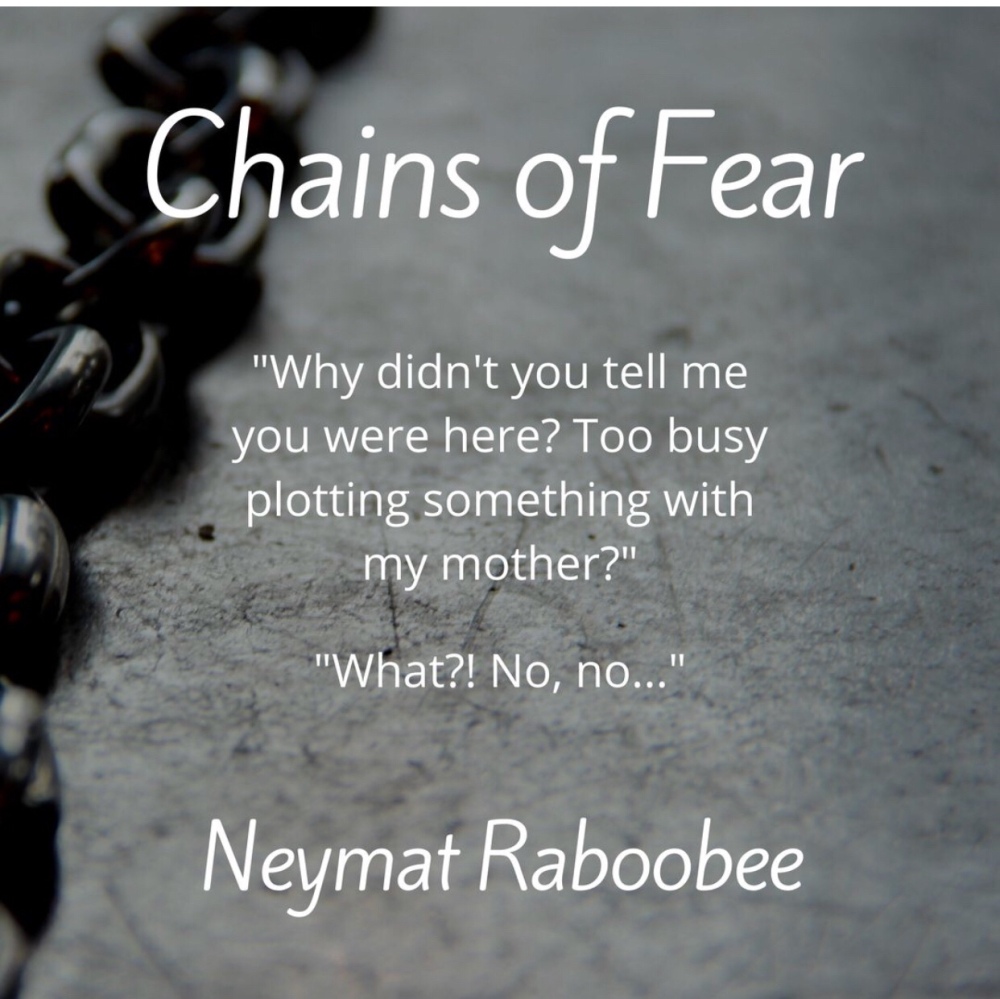